People Worth Voting For: John McDonnell 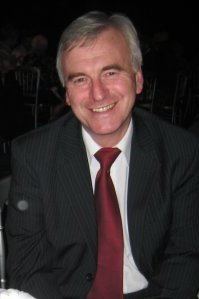 A consensus checklist of what constitutes real change is emerging from many sources. Securing jobs by intervening in manufacturing and restoring trade union rights; securing homes by a mass local authority house-building programme; stopping the squandering of public resources by ending the privatisation of public services; reasserting the government’s green credentials with no third runway; for young people freezing, as the first step towards abolishing, student fees; for pensioners restoring the link between pensions and earnings; halting the attacks on welfare; paying for our programme by fair taxation and cutting out the waste on the likes of Trident renewal and ID cards; and making government ruthlessly clean, open and fair with immediate electoral reform.

PS. These below are worth a look although right now tactical stop Tory voting may alter choices, a list of 100 top marginals. Candidates the Labour Representation Committee are backing-