The Human Centipede Model For Leadership In A Hung Parliament

Human Centipede is a schlock horror movie whereby a mad doctor who specialises in separating conjoined twins creates a… The clue’s in the title, he surgically attaches three hapless victims together, anus to mouth, to form an organism with one digestive tract, biologically implausible as that may be. Nevertheless such high concept body horror meets torture porn hijinks is doing its job causing sensation and gasps of horror which should translate into a healthy profit for the producers. It’s not called Showart, it’s Showbusiness people! Here below is the mad doctor with a helpful diagram for victims and viewers on his overhead projector (this immediately sets off alarm bells as to his competence, it’s 2010, Keynote, Powerpoint? Hello?)- 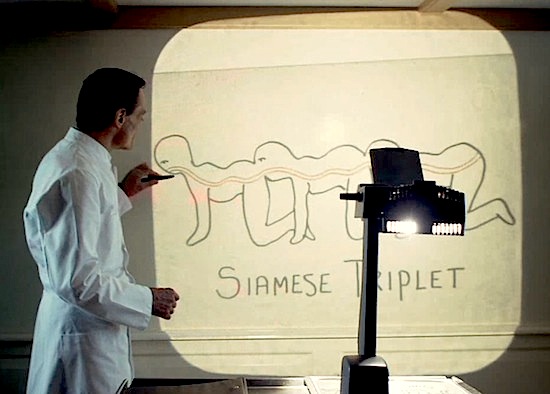 I say Cameron for the -worst- middle position, after all he already has that shit-eating grin…Clegg for front and Brown bringing up the rear, with Miliband following with the bucket & spade and a ‘Look, you’ve punished us enough about Iraq, all right? So don’t start punishing yourself.’ T-shirt.

The question then arises for the consensus state, could this creature be mated with a suitable female host to produce a new super race of neoliberal politician? Or are plans already afoot?

An antidote to such horror.

Posted in Establishment, Media, Politics. Tags: Media, Satire. Comments Off on The Human Centipede Model For Leadership In A Hung Parliament
« The Met Police Are Protecting A Killer They Know The Name Of
This IS Shock Doctrine »
%d bloggers like this: