With our police currently threatening demonstrators with violence and possibly invoking anti-terror legislation to repress protest. And the privately owned Association of Chief Police Officers labelling 200 children as potential terrorists. Argentina can give us a lesson in what state repression supporting ‘free’ market fundamentalists and backed by the US can become (of course the good news now is worker owned factories). From Otto @ Inca Kola News, he has thirteen pairs of photos, below is just one pair. Each shows an old photo of family, lovers or friends and then a current recreation but missing the people ‘disappeared’ by the right wing dictatorship.

Update: As per Otto’s request I am posting all the images, there is now some more detail about them-

UNESCO: Argentine photographer Gustavo Germano’s exhibition, “Absences”, explores the universe of the victims of “disappearances” during Argentina’s “Dirty War” (1976-1983). Photos are juxtaposed in pairs, one old and one recent. On the new one, a person is missing. Disappeared for ever, without leaving a trace.

And from Taringa! the orginal post, I’ve paired up the pairs that were posted as separate images and added the text from Taringa where there was some, (the short interview from UNESCO with Germano is posted below the fold after the photos, his site gustavogermano.com), click each for larger image:- 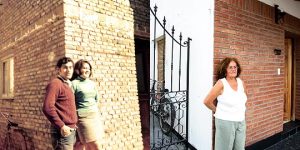 Interview conducted by Lucia Iglesias and Casey Walther (UNESCO).
In your photo exhibition “Absences”, you have documented the repression that occurred in Argentina. Why is it important to document these violations of human rights, instead of allowing these painful memories to rest, as some have suggested?

Some of the gravest human rights offenses, in my opinion, are those committed by States—that is to say, when the State is the agent of terror and becomes an instrument of illegal repression by using methods so perverse as the forced disappearance of people. These sorts of actions have consequences for society: Initially, there is the fear and uncertainty. Then over time, there is the sense of not being able to mourn.

So what I am trying to convey in my work is that, more than just the forced disappearances of people that happened in Argentina, there is also the time that has passed. I want to reflect the double effect that time has had. On the one hand, there is the time that the survivors endured while living in the absence of their lost loved one. On the other hand, there is the time forfeited by the persons who disappeared and did not have a chance to live out their lives. When I was creating the concept of this show, I thought that it would be good to capture the aging of the survivors. And it is this very basic and human concept that the terrorism of the State destroyed.

How did your work develop with the relatives of those who disappeared?

In all cases there were moments where real connections were made and where they relived the moment in the original photo. It was truly a journey to the past and, at the same time, a look into the future. There were cases where some of the relatives had never since returned to the place in the original photo. I don’t know whether it was consciously or instinctively, but every one of the relatives gave me their complete trust to work with them. I think this is reflected in the photos. Personally, I am humbled to have been the vehicle through which these people were able to denounce these crimes, and to have created the moment that allowed this to be conveyed. I also believe that, even though my intention was not to do an autobiographical project, the fact that I myself experienced losing someone in my family to these same crimes has allowed a greater rapport with these people, because between us there is a shared brotherhood. And through this project, my own family has been able to grow.

What’s more, all the people that I photograph are from the Entre Rios Province in Argentina, where supposedly “nothing happened”. I come from that province, and I felt that it was important to document cases of disappearances that were not known and affected normal people from distant villages and to show that the tragedy affected this province as well.

What is the current situation in Argentina with respect to these crimes?

In Argentina, they have abolished the laws that, until recently, had hampered the prosecution of those responsible for these crimes. Little by little, these people are finally being brought to trial, although to defend themselves they’re evoking the time that has passed and arguing that prosecution should wait until their lives have ended since they are already very old. Nonetheless, a few have been convicted, which we of course applaud. This is why my work tries to raise public awareness of this issue.

{In 1999, UNESCO awarded its Prize for Peace Education to the Mothers of the Plaza de Mayo, an association of mothers whose children disappeared in that period.}