I read about a leaked copy of the US-Iraqi agreement a few days ago when a radio station in Iraq mentioned some of its details, then it was mentioned in some Arab newspapers like Al-Qabas and Al-Sharq Al-Awsat. A couple of days ago, one Iraqi website (linked to an Iraqi armed resistance group) published the leaked draft on their web page for less than a couple of days before their website went offline. (Thankfully, I downloaded the 21 pages agreement and saved them before their server went down). I spent this weekend translating it, and just finished now.

The title of this draft is “Agreement regarding the activities and presence of U.S. forces, and its withdrawal from Iraq”, but this is the same agreement that is referred to as a “status of forces agreement” or “SOFA” or framework or whatever.

More at Raed in the Middle, I downloaded the translated doc and host a copy here, click to download and have a read:-

Jesus Has a Hotrod 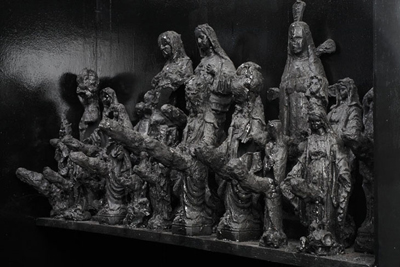 It’s sort of sad, fundies live in almost a symbiotic relationship with artists they complain about, the outrage actually makes it more fun to outrage them. After all is this really the best thing they could be doing with their time and money, hunger, disease, poverty, torture & war all solved are they? Of course if they prevail and art is censored then it gets less funny, but honestly if they do it will only make me dust off my Crucifixion porn movie script, you’ve been warned fundies! Watch the Lord get nailed on the cross like never before, eat your heart out Gibson.

A Christian group is taking an art centre to court, claiming it displayed an indecent statue of Jesus Christ. The statue was part of Baltic’s September 2007 to January 2008 exhibition by controversial Chinese-born artist Terence Koh, “Gone, Yet Still”.

Poverty To Die For

Now then the idea of having poor Indian people who live on 65p a day photographed in designer accessories that cost up to thousands is perhaps an interesting work if there was some serious political or artistic intent, (cf. Lars Von Trier’s Five Obstructions where Jørgen Leth is tasked to enjoy a luxurious meal in the red light district of Mumbai surrounded by its oppressed inhabitants but is not allowed to show them) however this is Vogue we’re talking about-

A spokeswoman for Indian Vogue editor Priya Tanna tonight said the magazine had been taken aback by reaction to the photographs but defended the decision to publish them, and said the poor ‘models’ had been paid ‘a significant amount.’

Their critics should ‘lighten up.’ Fashion thrives on “fantasy, aspirations and above all, fun,” she said.

“For our India issue we wanted to showcase beautiful objects of fashion in an interesting and engaging context. We saw immense beauty, innocence, and freshness in the faces of the people we captured. This was a creative pursuit that we consider one of our most beautiful editorial executions. Why would people see it any other way?” editor Priya Tanna told The Independent.

“This kind of juxtaposition is always there in India – the servant who serves a glass of wine which costs more than his monthly salary,” he said.

“When I saw these pictures, I thought the people looked sweet. I’m not convinced it’s offensive. In fact I think the high moral tone is a bit patronising. Wealth next to poverty is just a reality in India. Both have always existed. As long as you don’t humiliate or ill-treat poor people it’s OK. Lots of models can’t afford to buy Fendi handbags either.”

Yeah, well you’ve certainly refuted any charges of banal shallow appearance obsessed idiots with facile little sensationalist tricks to provoke attention and make more money. “Lots of models can’t afford to buy Fendi handbags either.”- Wow that’s like the best argument evah for massive inequality and exploiting it to sell shiny tat to credulous conservative morons terrified of emotional or psychological depth. It’s the breadth of intellect that finds Sex and the City a feminist meditation. Yes fashion can be fun and frolicksome but let’s face it, the history of even the richest designers using sweat shop labour is not exactly crowned in glory. Nor is the record for using models of colour. Worst of all at least designers have some creativity, these are just hacks who mindlessly cheer lead capitalist exploitation in order to look good.

Amy Goodman, Sharif Abdel Kouddous and Nicole Salazar were released but are still facing charges, Republicans and their libertarian wing (& corporate dems) need to ask themselves is there selfish greed worth a police state. As Glenn Greenwald noted this is no different to how China acted during the Olympics (and while the DNC was not quite as bad it was a repressive security state event with violent police attacks on dissent and the caging of free assembly and speech). China of course shatters the myth that free market capitalism equals a free society, the truth is neoliberalism leads to authoritarian corporatism, our financial sector is more unregulated than ever ask yourself how healthy your human rights feel. These are warning signs-

Ramsey County Sheriff Bob Fletcher told Democracy Now! that Kouddous and Salazar were arrested on suspicion of rioting, a felony. While the three have been released, they all still face charges stemming from their unlawful arrest. Kouddous and Salazar face pending charges of suspicion of felony riot, while Goodman has been officially charged with obstruction of a legal process and interference with a “peace officer.”

Democracy Now! forcefully rejects all of these charges as false and an attempt at intimidation of these journalists. We demand that the charges be immediately and completely dropped.

Democracy Now! stands by Goodman, Kouddous and Salazar and condemns this action by Twin Cities’ law enforcement as a clear violation of the freedom of the press and the First Amendment rights of these journalists.

During the demonstration in which the Democracy Now! team was arrested, law enforcement officers used pepper spray, rubber bullets, concussion grenades and excessive force against protesters and journalists. Several dozen demonstrators were also arrested during this action, including a photographer for the Associated Press.

Goodman was arrested while attempting to free two Democracy Now! producers who were being unlawfuly detained. They are Sharif Abdel Kouddous and Nicole Salazar. Kouddous and Salazar were arrested while they carried out their journalistic duties in covering street demonstrations at the Republican National Convention. Goodman’s crime appears to have been defending her colleagues and the freedom of the press.

Ramsey County Sherrif Bob Fletcher told Democracy Now! that Kouddous and Salazar were being arrested on suspicion of rioting. They are currently being held at the Ramsey County jail in St. Paul.

Democracy Now! is calling on all journalists and concerned citizens to call the office of Mayor Chris Coleman and the Ramsey County Jail and demand the immediate release of Goodman, Kouddous and Salazar. These calls can be directed to: Chris Rider from Mayor Coleman’s office at 651-266-8535 and the Ramsey County Jail at 651-266-9350 (press extension 0).

Democracy Now! stands by Goodman, Kouddous and Salazar and condemns this action by Twin Cities law enforcement as a clear violation of the freedom of the press and the First Amenmdent rights of these journalists.

During the demonstration in which they were arrested law enforcement officers used pepper spray, rubber bullets, concussion grenades and excessive force. Several dozen others were also arrested during this action.

Amy Goodman is one of the most well-known and well-respected journalists in the United States. She has received journalism’s top honors for her reporting and has a distinguished reputation of bravery and courage. The arrest of Goodman, Kouddous and Salazar is a transparent attempt to intimidate journalists from the nation’s leading independent news outlet.

Democracy Now! is a nationally-syndicated public TV and radio program that airs on over 700 radio and TV stations across the US and the globe.

One of the two senior Asian officers suing the Metropolitan Police for racial discrimination has lost his claim after alleging that a “golden circle” of white officers had been chosen to run Britain’s largest force.

Commander Shabir Hussain, 45, who is one of the highest-ranked ethnic minority officers in the country, brought an employment tribunal case alleging he had been repeatedly overlooked for promotion by Sir Ian Blair, the Met’s commissioner, because “my face did not fit and did not fit because I am not white”.

But after a hearing last month which heard evidence from Sir Ian that the blocking of promotion for an Asian officer by him would have been an “extraordinary aberration”, Mr Hussain’s claim for racial discrimination and unlawful deduction of earnings was thrown out.

But, er… get the last two paragraphs about the other case-

The decision came as controversy continued to rage around the employment tribunal claim by Mr Ghaffur. He claimed at the weekend that he had hired a team of security guards after receiving a number of death threats, some of them allegedly from serving Metropolitan Police officers.

Mr Ghaffur, Britain’s most senior ethnic minority officer, was also considering taking a leave of absence from the Yard as a result of the threats, which he said he had not reported to the Yard because he no longer believed the force could protect him.