329 Extrajudicial Killings by the Colombian Authorities in ’07

This was mentioned at BoRev over the weekend, this is the regime Uribe runs and is enthusiastically backed by the US and UK governments (and Alex James of Blur bass playing fame, he now lives in a house a very big house in the etc.)-

The number of civilians killed by the Colombian armed forces has soared, activist groups allege, with many of the abuses committed by army units that had been vetted by the State Department. There were 329 so-called extrajudicial killings by the Colombian military and police last year, a coalition of Colombian rights groups asserts in a report, a 48% increase from the 223 reported in 2006.

There is a correction in the LA Times article which is-

Colombia abuses: An article in Thursday’s Section A on human rights abuses by Colombia’s armed forces said that a report by rights advocates alleged that as of June 2007, Colombian military courts had won only four convictions in more than 900 cases of alleged murder involving uniformed soldiers and police. The article should have included the following sentence: “A Colombian Defense Ministry official said that since the formation of a special prosecutor’s office in mid-2007 to investigate alleged killings of civilians, 14 soldiers and police officers have been convicted in connection with those killings.”

The Colombian Commission of Jurists, a Bogota-based civil society group that is responsible for verifying many of the deaths, said last week that a significant number of killings of civilians by the armed forces had been reported so far in 2008 in five Colombian states, but provided no precise numbers. A separate analysis of last year’s killings by the Fellowship of Reconciliation, a New York-based peace group, alleges that 47% of the homicides were committed by army units that had been scrutinized in 2006 or 2007 by the State Department, which determined that they had complied with human rights requirements, making them eligible for U.S. military aid and training.

the body count is roughly half the size of the Tienanmen Square massacre, which froze relations between China and the U.S. for a decade. It’s about on par with My Lai, and larger than Wounded Knee, Tlatelolco, or the Madrid train bombings. We’re talking 13 Bloody Sundays, 36 Manson families, or 82 Kent States. It’s more than double the death count at Dujail, which is what Saddam Hussein was tried and executed for. In other words…let’s see how did the New York Times put it?…”he will be remembered as the leader who brought Colombia back from the brink and onto a path toward peace.”

Which really takes us back to the previous Dominion post:– An interesting thought experiment I suggest doing is- look at the present day status, look at the countries with no or very low US military presence (like ‘advisers’) then think about how those countries are portrayed in the media…

I was a bit unsure what to do with award-y type meme things but as I now have a whopping 2 it’s perhaps ungrateful to remain so stiff upper lippy, so thanks to Naj for a Kick Ass Blogger and to Korova from ages ago for a Thinking Blogger both of which I will make a place down a sidebar for and I think they will fit under the title- Peer Approval. Now as to the rules and chain letter passing on of these things…hmm bit suspicious of that plus I don’t want to leave good people out. It is a conundrum. Thinking… 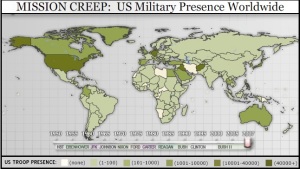 And I can’t resist… Dominion!

PS. And I suppose A Slight Case of Overbombing does apply.

Burma To Square One

The UN process being seen to be useless is now no longer being cooperated with by the opposition, compounded with Nargis and the Olympics passing without China being unduly embarrassed and the refusal of large corporations (Total, Chevron/Texaco) to halt regime enriching business while politician’s condemned the junta but not their corporate allies, have meant the Generals have clung on to power.

(IPS) – A United Nations-led effort to push political reform in military-ruled Burma plunged to a humiliating low on the weekend, raising questions about the effectiveness of the world body’s special envoy to the country, Ibrahim Gambari.

This shift was conveyed in the way Aung San Suu Kyi, the detained pro-democracy leader, treated Gambari during his six-day mission, which ended on Aug. 23. She refused to see him on at least two occasions. It was a silence of Gandhian proportions for the Nobel Peace laureate and, for the U.N. envoy, an unprecedented snub.

Deprived, as a result, was the photo opportunity that Gambari had used after his three previous visits to Burma, over the past year, to give the impression that he was making headway with Suu Kyi in paving the road for political reform. The images of the Nigerian diplomat posing with the 63-year-old Suu Kyi, who has spent over 13 of the past 18 years under house arrest, suggested she had confidence in the U.N.

But a scene outside the Rangoon home of Suu Kyi on Friday morning confirmed that Gambari’s luck had run out. The leader of the opposition National League for Democracy (NLD) party refused to open the gates of her rambling colonial mansion to two of Gambari’s representatives who had come to invite her for a meeting, after she had turned down an invitation at a state guest house 48 hours before. END_OF_DOCUMENT_TOKEN_TO_BE_REPLACED

Posted in Militarism. Tags: Burma. Comments Off on Burma To Square One

While mooching around this here web thingy I came across mention of an old video game that in America was called ‘Contra‘ hmmm. Anyway that led me to revel in a bit of kompooter nostalgia and thanks to the world wide intertubes I have been able to revisit the first machine I ever had- the 48K Sinclair Spectrum (yes with the rubber keys). Actually looking at the speccy I have to say the design remains really very nice, it still looks good. Perhaps I am biased, the beige BBC micro was never much to look at.

I saved up and got the Spectrum when it was about £130. In a very rough way the Spectrum was the cheaper slightly lower class computer, the BBC Micro was the proper BBC middle class machine (as was the Commodore 64). I would venture to suggest as price is a big factor in who owns what the Spectrum  was more of a people’s machine than the pricier rivals, certainly the posher kids in school had BBC’s but let’s face, the speccy had the gamez! Admittedly they were a big part of using it, I got a C90 cassette off a guy in school with 20 on it, oh the piracy (yes you’d load them via a cassette player you plugged into the back)! You also learned a bit of programming and I loved the 3D drawing program which is amazing when you consider-

Fuck me, even security tags on socks have better specs these days! It was a triumph of ingenuity, whereas today such excellence is matched by software bloat that fills the latest machines (Leopard  needs 512MB of memory 9GB of available disk space, ok it does somewhat more but still, blimey!). Anyways, here’s the bank holiday fun (and Cheesus it’s dark here, low grey cloud and people have got the lights on even though it’s lunchtime) you can play excellent online versions of Spectrum games, my two favourites- Jetpac and Ant Attack plus loads more, or you can get emulators and original game files (some digitised from the audio cassettes).