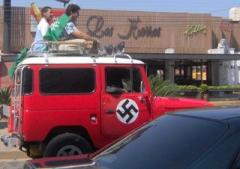 Via BoRev. Inca Kola News does a breakdown of the votes complete with loads of graphs and maps and all that good demographic stuff, the conclusion? Would you be surprised to hear the opinions of the wealthy conservatives (and, ahem, in places fascists) minority were being misreported as a nationwide split that favours autonomy, just like the Bush regime want, no go on, try to be surprised. The resounding smackdown the referendum gave to this fiction is being spun stubbornly to continue the ‘split’ meme. Corporate media with this predictable nonsense you are really spoiling us!-

Now let’s take the national vote in context to this one single province that lies inside one of nine departments that make up the entirety of Bolivia:

Conclusion
The press is quick to describe Bolivia as “a country divided”. This is obviously far from the case. In fact, President Evo Morales enjoys popular support in six of the nine departments that make up his country. Two out of every three Bolivians voted for him to continue as their President. And as for the autonomy rebel movement, once you leave the city of Santa Cruz (not the larger department that actually voted for Morales), those who oppose Morales are few and far between.

Last Sunday’s vote was called “exemplary” by the overseeing international neutral observers, and very few if any serious incidents were reported. It was undoubtedly an overwhelming victory for President Morales. However it also showed that the much talked about autonomy movement is not a nationwide curse, but in fact centred very much on one single city. Ruben Costas is now being shown as the Emperor With No Clothes (though perhaps we can leave him his underpants).

Once these figures are looked at closely, it becomes difficult to understand the ostensible claim of Santa Cruz and its push for autonomy. It cannot claim the backing of the wider department, because without the regional capital Evo Morales won the popular vote. By demanding some sort of breakaway from the country of Bolivia, a single city would be trying to usurp a geographical area many times larger than itself. The city of Santa Cruz has, of course, the right to vote the way it prefers. But if it pushed for the autonomy it demands, it would have to leave behind the greater region and become a sort of Bolivian Vatican City!

This is, of course, ridiculous. We should therefore see the call for autonomy for what it is; a single city’s complaint against its national government, something that is common worldwide and not any reason to continue ignoring national laws. The time has come to recognize Santa Cruz for what it is, namely a city bent on anti-democratic behaviour and not the centre of some oppressed nation that deserves the world’s attention.

4 Responses to “The Bolivia Lie”