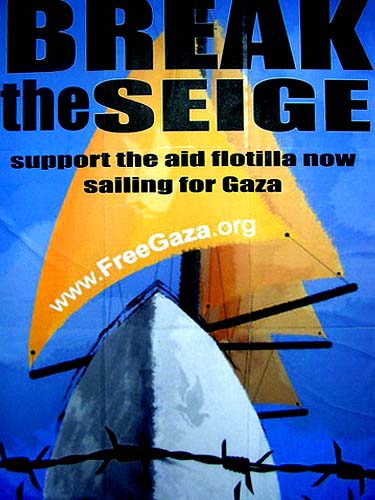 Mission Statement
We want to break the siege of Gaza. We want to raise international awareness about the prison-like closure of the Gaza Strip and pressure the international community to review its sanctions policy and end its support for continued Israeli occupation. We want to uphold Palestine’s right to welcome internationals as visitors, human rights observers, humanitarian aid workers, journalists, or otherwise.

Who are we?
We are these human rights observers, aid workers, and journalists. We have years of experience volunteering in Gaza and the West Bank at the invitation of Palestinians. But now, because of the increasing stranglehold of Israel’s illegal occupation of Palestine, many of us find it almost impossible to enter Gaza, and an increasing number have been refused entry to Israel and the West Bank as well. Despite the great need for our work, the Israeli Government will not allow us in to do it.

What are we going to do?
We’ve tried to enter Palestine by land. We’ve tried to arrive by air. Now we’re getting serious. We’re taking a ship.

Well in fact they are taking two, but they’re more boats than ships (they are brave), have a look at their flickr photostream. You can subscribe for email updates here or through their main site www.freegaza.org and they need money, so if you’re flush, drop them some cash. Interestingly Lauren Booth, Tony Blair’s sister in law is on one of the boats, she writes-

Freegaza have the boats, the crew, and the willpower to challenge Israel’s illegal barricade. Now all they need is the weather. Here is a message to the Gazans watching their sea for signs of ships; the Freegaza movement are on their way. When the winds are with them, nothing else should be able halt this mission of peace and goodwill.

And an excerpt from Jeff Halper who is also onboard-

An Israeli Jew in Gaza– As activists committed to resisting the siege non-violently, I have no objection to the Israeli navy boarding our boats and searching for weapons. But only that. Because Israel has no right to besiege a civilian population, it has no legal right to prevent us, private persons sailing solely in international and Palestinian waters, from reaching Gaza – particularly since Israel has declared that it no longer occupies it. Once the Israeli navy is convinced we pose no security threat, then, we thoroughly expect it to permit us to continue our peaceful and lawful journey into Gaza port.

The flotilla is slowly picking up media coverage, although thus far US media have been notable by their absence. So spread the word and make sure they have enough publicity to make their being stopped too embarrassing for the besiegers.

Was Georgia egged on in a neocon set up? And shit loads of navy ships are converging on the Persian Gulf (ht2 Naj).

Meanwhile… um, Six sailors working as prison camp guards in Iraq face courts martial for abusing detainees, some of whom were sealed in a cell with riot control gas, the U.S. Navy said on Thursday– what, like a gas chamber?

ICE are continuing their domestic terror policy and killing detainees. And yes it is deliberate, the policy is called Operation Endgame, because I suppose ‘final solution’ had already been taken.