An important track to me, this is the single edit with odd and not helpful ventriloquist dummy video, longer album version is here, the best version is the full length of this single edit mix which resides on a CD single mere metres from this very keyboard. The intro is ‘O Euchari’ composed by Hildegard von Bingen (1098 – 17 September 1179) who was quite a remarkable woman and visionary (as evidenced by the fact she invented the sampler in the twelfth century…).

When They Killed The Noise 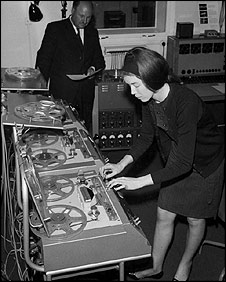 “…under [the BBC’s policy] Producer Choice, the workshop could not compete on price and its demise was inevitable.”

Oh the BBC radiophonic workshop! It’s 50 years since it began and ten since neoliberal management killed it. Some video clips and memories at the BBC here. Including the Dalek voice! (Which you could now recreate with this toy.)

Anyway it was a truly ground breaking nest of experimental sound that should be considered along with other pioneers, no accident this kind of experimentation being heard by mass audiences was via a subsidised organisation where innovation was allowed to flourish not murdered in the name of short term profits.

Ten years ago the workshop was disbanded due to costs but its reputation as a Heath Robinson-style, pioneering force in sound is as strong as ever, acknowledged by ambient DJs like Aphex Twin. Although much of its equipment has long been sold off, every sound and musical theme it created has been preserved. To mark its 50 years, there are plans for a CD box-set. Here Dick Mills and Mark Ayres, who both worked there, use the surviving equipment to revive four sounds from the past.

One pluck of a guitar string became the famous Dr Who bass line. Derbyshire and Mills sped it up and slowed it down to get the different notes, and these were cut to give it an extra twang on the front of every note.

“It slides up to the note every time if you listen carefully,” says Mills. “Delia fabricated the baseline out of two or three lines of tape. You’d be scrabbling around the floor saying ‘Where’s that half-inch of tape I wanted to play on the front of that note?'” Every sound generated by the workshop and used in radio or television is preserved, partly in thanks to archivist Mark Ayres, who worked there while a student.

Clinton, Move Away From the Button

I’m staying out of US (circular firing squad) type Democratic politics but this is worth doing- Rebuke Clinton for threatening to “totally obliterate” Iran. (ht2 Naj)

AMNESTY International has accused Ethiopian soldiers of killing 21 people, including an imam and several Islamic scholars, at a Mogadishu mosque and says seven of the victims had their throats slit. Amnesty said those killed at the mosque included imam Sheikh Saiid Yaha and several scholars of the moderate Tabligh group that operated there.

“Eye-witnesses report that those killed inside the mosque were unarmed civilians taking no active part in hostilities,” Amnesty said.

“Seven of the 21 were reported to have died after their throats were cut – a form of extra-judicial execution practiced by Ethiopian forces in Somalia.”

Some moderate Islamist leaders have reacted to the mosque incident, and a recent upsurge of fighting in Mogadishu, by postponing plans to join UN-sponsored peace talks.

Amnesty urged the Ethiopian military to release all 41 children it said were held after the mosque raid. “Witnesses have told Amnesty International that Ethiopian forces would only release the children from their military base in north Mogadishu ‘once they had been investigated’ and ‘if they were not terrorists’,” it said.

Some of the children – who were aged as young as nine – were reported to have been freed, though the majority were still in custody, Amnesty said. Witnesses said they had seen beheaded bodies lying outside the mosque after the fighting.

Hilariously this story has been headlined for American consumption as Gas to Hit $7 a gallon!!!! Oh for the love of cats, it is £1.20 a litre here, a US liquid gallon is 3.785 litres so that’s-

Posted in Capitalism. Tags: Oil. Comments Off on Don’t Panic