Raw Story detail one of the cult madras facilities that produce war priests for the Empire:

The Defense and Strategic Studies program at Missouri State University is “outside the academic mainstream, but within the policy mainstream,” Robert Jervis, a Columbia University professor, told Bloomberg. Its scholars are quicker than their counterparts at other schools to favor aggressive military policies, according to Jarvis, who specializes in foreign policy decision-making.

The school’s director, Keith Payne, worked under Donald Rumsfeld at the Pentagon, and its faculty includes former Undersecretary of State Robert Joseph, who advised Bush to leave the anti-ballistic missile treaty, Bloomberg reported. The program includes classes on “Space and Information Warfare,” “International Terrorism and Security,” and “The Rise of the United States to Preeminence,”

The Missouri program dates from the 1970s too, but it was founded by William Van Cleave, now 71, a defense expert who took a skeptical line toward arms talks and served as the head of President Ronald Reagan’s defense transition team after the 1980 election…Payne, who was Rumsfeld’s top official in charge of nuclear weapons strategy in 2002 and 2003, describes the school’s aim as hands-on preparation for government work.

The Virginia program is funded by a combination of public and private sources. Payne estimates that as much as 15 percent of the program’s budget comes from defense contractors; Bethesda, Maryland-based Lockheed Martin Corp., the world’s largest defense company, gave about $50,000 last year and offers internships. Lockheed is impressed by how ready graduates are “to be involved in the policy process,” said William Inglee, Lockheed’s vice president for plans and policy.

Next week, they can start a course on nuclear proliferation taught by Joseph, who left the State Department in February. He favors deployment of anti-missile systems of the type Bush and Russian President Vladimir Putin are sparring over.

Wow, neo-cons, imperialists, arms corporations all making the next generation of scum, gives you a warm fuzzy feeling don’t it? Be-suited, yuppy, war mongering filth. Now far be it from me to lecture the human race, but if you are taught how to run the world by places that are funded by people who make money by having wars and who believe in one groups superiority over others, just what the fuck do you think the outcome is gonna be?

CIA ‘torture’ flights alleged to have taken terror suspects out of Europe did not land at UK airports, senior police officers have said. An 18-month inquiry was conducted after human rights group Liberty claimed such flights were chartered by the US government and landed at British airports over 210 times since 2001.
Liberty has refused to accept the findings of Greater Manchester Police’s chief constable, Michael Todd, who agreed to probe the allegations on behalf of the Association of Chief Police Officers (Acpo).

A statement released by Acpo said: “There was no evidence that UK airports were used to transport people by the CIA for torture in other countries. There was nothing to substantiate the claims in the evidence supplied by Liberty.” Liberty director Shami Chakrabarti has accused Acpo of “spin” and questioned whether there had in fact been any investigation. She said the group had received a letter from Acpo today “refusing” to investigate.

So wait ACPO say they are not investigating to Liberty, then have a press release saying there is no evidence for the CIA flights amongst ‘available’ evidence. This stinks, we need to know how many officers investigated, who was questioned, what documents were seen and/or requested, how much money was spent on the investigation.

Mr Todd has now examined all of the information available relating to this issue and has concluded that there is indeed no evidence to substantiate Liberty’s allegations. “There was no evidence that UK airports were used to transport people by the CIA for torture in other countries.”

Because at the moment it looks like only one man- Todd, looked into this and he only examined the ‘information available’ whatever that means. Otherwise this stinks of a very dishonest whitewash to cover up the govts. knowledge and subsequent lying about the rendition program. I think the stakes are high because Blair may be found to have lied to parliament as will other senior NuLabour tossers.

This release came out as soon as the results of Marty’s investigation were announced and Todd is very well know for being a media savvy Chief Constable who idolises Norman Schwarzkopf and George Patton!, I think this is spinaganda (and if that term doesn’t exist, I just invented it, maybe it’s sunstroke) by the establishment to protect their complicity in criminal activity. And if you fall for it you are fucking sheeple. 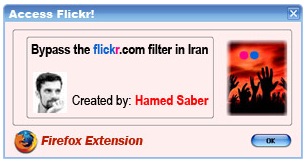 Yes! Noticing some links coming in to me I found a big discussion on flickr because as of a couple of days ago the Chinese govt. blocked flickr access for its citizens, they did not announce it and when you try to access in China there is no clue as to why the site is not working. Anyway word got around and Chinese peeps began to download the flickr plug-in for Firefox that Hamed invented (Iran Blogapalooza entry here), there are now lots of happy people in China accessing their flickr accounts, posting pics and able to blog about it. All thanks to Hamed, I think flickr should give him a permanent free pro account and thank him and he should be up for an award for creating a means for people to bypass state censorship and enjoy the community of photographers and their comments, in fact consider this a nomination. And… maybe that will stiffen the resolve of Yahoo (& google) to be less accommodating to censoring regimes. Hamed’s latest and one of his most favourite pics:

I’m not sure flickr realise it yet but because of their site, firefox and Hamed’s invention they are becoming one of the most important venues for artistic expression and free speech on the web.

Once firefox is downloaded add the plug in, or get it here:

I’m asking Hamed if it’s ok to make a banner/icon to put on my blog that will send people to the plug in to help it spread as I get quite a few searches for Hamed coming here, so that could be up soon.