TIRANA (Reuters) – An Albanian government decree allowing U.S. Marines to be the only armed corps guarding President George W. Bush on a visit next week has been seen by some in Albania as an insult to their security forces. Albania has been looking forward to Bush’s visit on June 10, the first by a U.S. president. He will be staying for seven hours as part of a regional tour.

As part of preparations, parliament on Thursday approved an act that allows more than 500 combat-ready U.S. troops entry into the country, and sanctions their use of “force proportionate to any possible threat.”

This is effectively a temporary 7 hour occupation of a country, so I guess they are getting off lightly.

When Wuterich’s team finished, 19 people were dead in or near the houses and another five men were killed near the car they were riding in.

Frank, who was sent to the scene hours after the killings to move the bodies, said two women and six children were found in the bedroom at the end of a hallway, all but one on the bed. All the children were under age 15, he said.

In other words we will kill everyone in a house that we suspect a ‘terrorist’ (as determined by us) has been. That is a threat, it is also a war crime. The bottom line of this case is this- if what they did was not a crime then the US is saying to countries it occupies that we will kill anyone with impunity at the same time we expect you to be thankful to us for our presence. So ask yourself, would you accept that deal? Or would you fight to the death to expel the invaders?

From Soup To Nuts

The Empire are now rolling out the next stage of it’s Iraq plans, the Dems are on-board for the war having mastered the pantomime of last weeks vote which they engineered to ensure the war funding passed while appearing anti-war. If you doubt that read the wonky ins and outs courtesy of David Sirota–

When non-political folks look at what happened today, they will see Democrats approved a procedural rule, and voted against a Republican bill to give President Bush a blank check for the Iraq War. What they may not see is the real story: The procedural vote was the vote to create a situation that Democrats knew would result in the passage of a blank check. In other words, the procedural vote was the key vote in support of the blank check, because it set up a situation whereby passage of the blank check was inevitable. If that rule vote didn’t pass, the blank check wouldn’t even be able to come to the floor in the inevitably-going-to-pass situation it ended up coming up in.

President George W. Bush would like to see a lengthy U.S. troop presence in Iraq like the one in South Korea to provide stability but not in a frontline combat role, the White House said on Wednesday. The United States has had thousands of U.S. troops in South Korea to guard against a North Korean invasion for 50 years.

Democrats in control of the U.S. Congress have been pressing Bush to agree to a timetable for pulling troops from Iraq, an idea firmly opposed by the president. White House spokesman Tony Snow said Bush would like to see a U.S. role in Iraq ultimately similar to that in South Korea.

There are a couple of sayings that are often applied to how we citizens are managed on planet earth, old chestnuts, cliches if you will.

1. If you put a frog into a pan of boiling water it will jump out (don’t do this at home kids, the frog will be badly hurt). But if you place a frog in a pan of cold water then gently heat it the frog will remain and be boiled to death eventually.

2. Treat the people like mushrooms, keep them in the dark and feed them on shit.

I don’t even know if the frog thing is true and as a vegetarian I don’t recommend any research in this area. But it is a metaphor for how incrementally small changes over time will go unnoticed while radical change will be seen and perhaps fought against. The lesson for the canny politician is to achieve your ends, do it slowly. The mushroom joke shows how secrecy is also to be employed to mislead and manage the populace. Combine these two together and you get Mushroom Soup.

So there you have it, before they took power the plan existed to occupy and control Iraq, events once they were in power made this more easy. To ensure opposition to the plan would never arise strongly enough to endanger the strategy it is revealed piecemeal and only when circumstances dictate the necessity. This is Empire in motion. In the next 2 years- the oil law heralds the splitting of Iraq into 3 states, the castle keep US bases ensure order and oil production. The only fly in the ointment is not our opposition, that would only matter if this were a functioning democracy, the only opposition to this is the Iraq resistance. 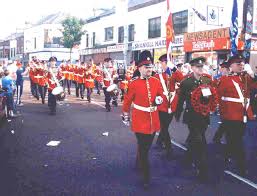 Yes, I have come to admit a terrible prejudice, a low-lying bigotry that frankly I do not care to correct. I mean I know to many people this feeling I hold is unacceptable but I think I am right, the title of this post is incorrect. I feel I am compelled by political correctness to profess shame but within myself I feel none. Simply put I am repulsed by Ian Paisley Jnr. and I think what he does is wrong. Furthermore I think he harms himself and without caring about it he harms society. I hate what he does.

I imagine in a fearful fugue the vile things Ian must do with his sexual partners, to feel properly moral I need to think about his evil lustful activities quite a lot and then be repulsed by them. Imagine his rubbery protestant lips gliding over a greasy labia, his pale Anglo-Irish back undulating above some female as he pounds away, probably smiling all the while at the harm he carelessly causes to society. Sometimes to feel extra repulsed I imagine him naked and oiled pleasuring several women at once, kissing and fingering there nubile flesh as he mounts them one after another in a variety of sweaty and explicitly revealing positions. Oh yes that’s extra specially repulsive, oh how he should be punished for that, for all he does within his ‘conservative lifestyle’ all he cares about is his own filthy pleasure, his perverted desires for power to order society to his disciplined design. Sometimes to maintain the proper level of outrage I search, late at night, websites depicting the filthy man/woman love this selfish sex monster so enjoys.

I know however, I am strong I will not give in to this deranged decadence, I mean there were occasions, everyone makes mistakes when they are young and drunk. Lascivious ladies with their painted lips and soft curves, the fullness of a breast, the pleasing haunch, the soft silky panties sliding slowly down long legs. No, NO! I will not be a dirty beast not again, not after last weekend. No it is the duty of all upstanding right thinking men to concern themselves night and day with the sex other people are having. And Ian it has to stop. I think you know what I mean…

Posted in Uncategorized. Tags: conservatives, Culture(!), Equality, The Church Of The Anus Of Christ. Comments Off on Ian Paisley Jnr. & My Secret Shame

Two words when you think about Osborne should enter your mind- Flat Tax. Blair is a tory Osborne only more so, flat tax is the rich’s holy grail, anyone that mentions it has the concerns of less than half a percent of the population at heart. And most of them avoid tax anyway. Yet strangely more than that tiny percentage vote conservative, there’s one born every minute.

My Name Is Robert Zoellick & I Globalize Death

In a speech to the right-wing Heritage Foundation in Washington, Zoellick made the case that there is no alternative to globalization and that U.S. companies and consumers were already benefiting in countless ways from this new wave of corporate-led economic integration. To drive his point home about all the new opportunities, Zoellick noted: Even the funeral business has gone global, with a Houston-based company now selling funeral plots in 20 countries.

member of the Council on Foreign Relations, as well as the Trilateral Commission and was one of the signers of the January 26, 1998, Project for the New American Century (PNAC) letter.
Zoellick spelled out a new foreign policy that would be based on the preeminence of military power—a concept of a new American century in which unquestioned U.S. military superiority would allow the United States to shape the international order.

Zoellick coined the phrase “the coalition of the liberalizers” prior to the failed WTO ministerial in September 2003 in referring to the group of countries that have joined the United States in bilateral or regional trade pacts. In the face of mounting opposition from Brazil and other developing nations to the U.S. global economy agenda, trade rep Zoellick began forging a “coalition” of trade partners to agree to open their markets and protect U.S. investment in order to ensure coveted access to the huge U.S. market.

And he will be tough on copyright clampdowns (hello the bootleggers, hello DRM), because he profits from it, on the board of-

More at Lenin, such as his direction to the decimated Fallujah to be self reliant. He has worked on stabilising Darfur, pushing for a UN/NATO involvement, which seems his one glint of humanity contrary to his ambitious banker heart, unless… there’s oil there.

Cindy Sheehan Takes A Break From The Empire

A few days ago she showed her disgust with the Dems helping to keep the war going but she has now written that she is to leave the peace movement behind, her disgust is overwhelming-

This is my resignation letter as the “face” of the American anti-war movement. This is not my “Checkers” moment, because I will never give up trying to help people in the world who are harmed by the empire of the good old US of A, but I am finished working in, or outside of this system. This system forcefully resists being helped and eats up the people who try to help it. I am getting out before it totally consumes me or anymore people that I love and the rest of my resources.

Good-bye America…you are not the country that I love and I finally realized no matter how much I sacrifice, I can’t make you be that country unless you want it.